Dąbrowa Culture Centre was established by the Municipal Council of Dąbrowa Tarnowska in 1989. It is housed in a pre-war building of “Sokół” Gymnastics Society. The only cinema in the county, “Sokół”, functions just in that building. The Centre offers at present a number of amateur groups: a brass orchestra, “Dąbrowiacy” folk band, “Wiarusy” street band, the Youth Theatrical Group preparing performances with puppets and real actors as well as satirical programs (it has won the prestigious award “Srebrna Maska” for “The Wedding” at the Małopolska Festival of Amateur Theatres and, twice, a special award for their puppet theatre section at the Małopolska festival “O Wielką Nagrodę Zająca Poziomki”). The active Fine Art Club organizes annual exhibitions of most interesting works of its members. At the centre there is also the Film Discussing Club “Tyłem – do Przodu” focusing on presentations of artistic films and popularisation of movie culture by public meetings with Polish directors and actors (the only such club in the region of Tarnów). The Centre takes care of the multi-generation folk group of song and dance “Nieczajnianie” of Nieczajny Górnej.

The School of Music is another important aspect of the Centre activity as here professional pedagogues teach children play the piano, the violin and the acoustic guitar. There are cyclic presentations of the pupils, often accompanied by exhibitions of paintings and sculptures regularly held at the gallery of the Centre (the average of 10 exhibitions in a school year).

The Culture Centre runs a community centre for children and teenagers at Westerplatte estate (block of flats no. 5) and an internet café. It issues a social and cultural monthly for teenagers, “Kulturalni”.

The offer for the local population and visitors to Dąbrowa Tarnowska comprises a permanent exhibition on the Jewish culture and religion within the framework of the so-called Stibel, i.e. the Jewish Memorial Chamber at Daszyńskiego 8, showing exhibits characteristic of their culture (the book collection of over 200 volumes in Hebrew, menorahs, talliths, phylacteries, tefilins, skull-caps, old photographs, furnishing of a typical Jewish household, daily use objects). The commune offers numerous cultural events of commune, county, regional and even international scope.

Major cyclic events making the town and commune so attractive and organised or co-organised by the Culture Centre include: 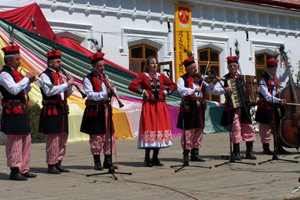 The Centre puts forward an interesting didactic offer for children and school youth including: the already mentioned School of Music and hobby clubs (theatre, journalism, fine arts), numerous reciting and artistic contests (e.g. county qualifications for the All-Polish Reciting Contest, the reciting art tournament “Poszukiwania”, the inter-commune competitions devoted to independence traditions – co-organised with the Commune Office in Radgoszcz, the Spelling Master of Dąbrowa County – co-organised with the Primary School no. 1, Jerzy Braun memorial Regional Reciting Contest of Works by Writers of Dąbrowa and Tarnów Land, the County Scouting Festival, the Fine Arts Festival of Schools of Dąbrowa County – co-organised with the County Office, the Commune Office in Radgoszcz and the Scouting Headquarters in Dąbrowa Tarnowska, the organised with the Complex of Secondary Schools no. 2 Holocaust Remembrance Days “There are no more Jewish towns in Poland”, the organised together with the Primary School in Lipiny contest of carnival masks). The offer includes also meetings of the Film Discussing Club (discussions following shows of interesting films), panel discussions with a participation of guests within the framework of the programs basing on performances or special shows on subjects as: aggression, tolerance, suffering. There are also cyclic meetings with poetry and popular scientific lectures (medicine, history of the town) co-organised by the Culture Centre , the Society of Culture Creators of Powiśle Dąbrowskie and the Association of Dąbrowa Inhabitants.

The Commune Easter Palm Contest is an event of major importance for cherishing folk culture. The event is organised together with a few partners in Gruszów Wielki, and is accompanied by numerous exhibitions on the subject and festivals (and tasting) of regional dishes (Palm Sunday, an open event). Local traditions are continued also by commune harvest wreath contests held during the Harvest Home Festival.

Dąbrowa Culture Centre promotes the healthy lifestyle and fair play competition in sports at a few sport contests organised throughout the year (e.g. tournaments within the framework of finals of the Great Orchestra of Christmas Charity , spring indoor football tournaments for the Mayor’s Cup and the volleyball tournament for the Cup of Dąbrowa County Executive, cross-country runs held on occasion of the National Independence Day on 11 November and associated with the historic importance of the Polish Gymnastics Society “Sokół” – County “Sokół” Runs). 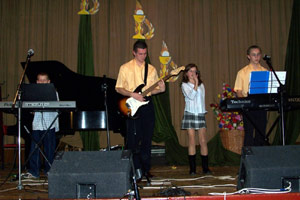 The centre supports the young generation in their creative work for the environment and thus participates in the ecological actions (within the framework of the task “Clean Breń –clear mind in the clean springs” co-financed by the Foundation “Partnership for the Environment”), in the exchange of regional products between the Lower Secondary School no. 2 in Dąbrowa Tarnowska and a Spain school in Gijon (the international undertaking EJE- Young Europeans’ Initiative), and assisted an informal group working on the first in the history of the county and commune youth musical “The Wizard of Oz”. The centre helps in organisation of municipal and county celebrations of national holidays: the 3rd May Constitution and of the 11th November (sets, the brass orchestra, technicians) and often assists organizers of charity events, picnics and outdoor galas. During summer and winter holidays and on free days it puts forward an abundant offer of spare time activities for all young inhabitants of Dąbrowa, e.g. computer games, open theatrical and artistic activities, recreational picnics, concerts, theatrical and satirical shows (e.g. Women’s Day with Miss Dąbrowa beauty contest, Children’s Day at the Culture Centre, the Strawberry Holiday, the Oak Day, Farewell to Holidays).

Dąbrowa Culture Centre is a cultural institution of the local government always open towards cooperation offers from associations, schools and other institutions what can be seen from the number of co-organised events. The centre is the only institution in the county with its official website including a public cultural forum where visitors can freely exchange their views on the subject of local cultural and social life in Dąbrowa Tarnowska. The Culture Centre has two rooms (with 250 and 40 seats) renting them for commercial events at competitive prices.